I have been reading some fantastic blogs on my travels through the A to Z Challenge. One of them is by Geoff Maritz, who lives in Capetown, South Africa. Geoff’s concept for the Challenge is to write about his home in Africa, including its wildlife. You can find Geoff’s blog here: Geoff’s Blogs. He has a killer post about Kilimanjaro today – great K word, Geoff!

Geoff has inspired me to write about some of Australia’s unique killer wildlife. Let me show you a couple of our natives.

Kangaroos are native to Australia and are marsupials. The name ‘kangaroo” is derived from the Aboriginal language. “Kangaroo” was originally “gangurru” and was  the native’s description of the grey kangaroo. Groups of kangaroos are called mobs.

Some kangaroos can jump 30 feet and and can hop up to 45 kilometres and hour. The largest kangaroo, the Red Kangaroo, can grow as high as 6 feet and weigh 200 pounds. Something I didn’t know and just found out was that kangaroos can’t move backwards and they can’t move their back feet independantly on land. However, when they swim they can kick with one foot at a time. Baby kangaroos are called joeys and are born after only 31 – 36 days of  gestation.  They are basically tiny,  pink, hairless animals that don’t come off of their mother’s teat for weeks and live in their mother’s pouch.

Kangaroos are strong and males usually box. Usually this is playful, but can be part of a show of dominance. You do NOT want to be kicked by a kangaroo, although it is an amazing feat of strength and balance. A kangaroo will rear up on its tail and then kick with both feet at the same time. If you are a male of average height, that usually connects with your pride and joy. Great subject for a family video, but you would only want to capture that frame once!

Kangaroos essentially sleep during the day and feed at night. Contrary to popular belief, there are no kangaroos hopping down the street in urban areas, although in some parts this can happen in times of drought. Most urban dwelling Australians see kangaroos by the side of the road – either alive or as road kill or in a wild life sanctuary, just like tourists.

Koalas are only found in four states of Australia: Queensland, South Australia, New South Wales and Victoria. The word ‘koala‘ comes from an Aboriginal word meaning ‘no drink’. Koalas mostly eat eucalyptus leaves and this provides them with the water they need. Therefore, they do not, or only rarely, drink water.

Koalas are not actually bears, they are marsupials, which means they carry their young in a pouch like kangaroos. Adult koalas measure between 64 to 76 centimetres in length and weigh between 7 and 14 kilograms.

Koalas have a great life, they basically eat and sleep and seem constantly in a languid satiated state. The reason Koala’s sleep so much is that it takes a lot of energy to digest eucalyptus leaves, which are tough. They are also poisonous to other species.  Male koalas are solitary animals, like their man caves and often live alone. 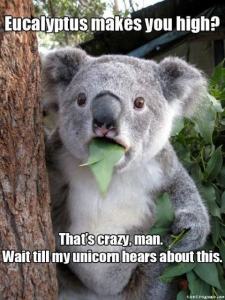 Most urban Australians will see koalas only in the wildlife sanctuary just like tourists. Sometimes, you can catch a glimpse of a colony of koalas living in trees in rural areas, but in my experience this is occasional at best. Unfortunately koala habitat is on the decline and they are also under threat from cars and dog attacks.

So, come on down and see the natives. They are cute, entertaining and we really don’t bite….much!

8 thoughts on “K is for Killer Wildlife: Kangaroos and Koalas (#atozchallenge)”