The biggest weekend in Sydney’s baseball history is currently underway.

Since the announcement in June 2013 that the MLB was heading Downunder, Australia’s baseball fandom has eagerly awaited the arrival of the LA Dodgers and Arizona Diamondbacks to its shores and it’s finally time to play ball. The hallowed turf of the Sydney Cricket Ground has been transformed for the weekend into a baseball pitch, with 250 tonnes of San Diego clay being flown in for the occasion. Our very own field of dreams. 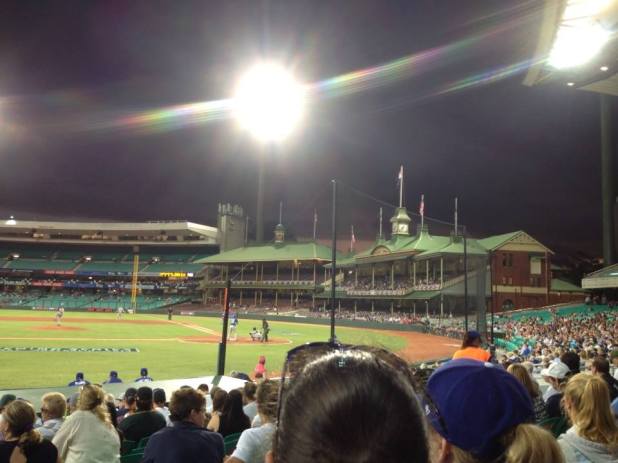 Sydney Cricket Ground tuned into a baseball field for #openingseries

It’s no secret I am a baseball tragic. How fortuitous then that the MLB chose to open its 2014 season away from North America in my hometown. As this is only the sixth time this has happened in  MLB history and the first time for Australia, there is a tremendous amount of anticipation for the event.

Each of the Diamondbacks and Dodgers play Team Australia (sometimes also known as Southern Thunder, but not by many) in a warm up clash and then it’s on to the main game Saturday night to be followed by a game on Sunday. That’s at least 36 innings of prime time A grade baseball.

Last night saw the first of the four games with Team Australia taking on the Dodgers. The above photo shows our view of the game. The Dodgers managed to win 4-2, but it was less about the score and more about the spectacle. The national anthems, the US flag flying alongside the Australian flag, a home run, the seventh inning stretch and classic baseball food. Like the nutritious meal below:

Scrumptious in a baseball helmet kind of way and almost resembling real food. None of that matters though, this is the MLB.

We sat behind the Dodgers dugout trying to spot baseball celebs like Clayton Kershaw and Don Mattingly. How close does an Aussie usually come to a $253million sports contract?  There were plenty of Dodgers fans in da house along with plenty of others dressed in their baseball kit. I am proud to say that the Boston Red Sox were proudly represented by more than a few fans in the fashion stakes (including moi) and it seemed like one big fancy dress party. As you can imagine there are usually not a whole lot of places in Australia an adult can wear their baseball kit.

It was a great night and a terrific lead in to the real deal tomorrow.

The whole event has been a long time coming for us Australian baseball fans. And when it’s all over the memories will linger and we will regale each other with stories from the great MLB opening series of 2014.

So a big thank you to the MLB, ABL (Australian Baseball League and owned by MLB), the Dodgers and the Diamondbacks for bringing the spectacle to our town. For at last Australian baseball fans can shout: