I’m not sure where the last month has gone. I have looked high and low.  I’m sure it’s around here somewhere. It was not my intention to lose a month of blogging, but I’m reappearing briefly before disappearing again to lose myself in European adventure. 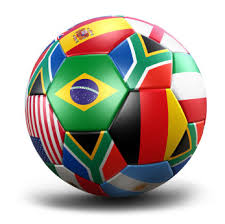 But not before setting out my observations on the opening game of the World Cup. If you have to ask which World Cup, you are clearly not a soccer/football fan, because there is really only one World Cup and that’s THE World Cup. Before I start, a warning to the football purists, I grew up in a soccer world. That’s right, a soccer world, not a football world. My dad was a soccer fanatic. Born of European origin he transplanted his passion for the game to his adopted country. This meant I grew up on a steady diet of weekly soccer games at which dad would discuss soccer politics and yell at the ref. He would also buy a bag of peanuts to eat during the game and at the end of the 90 minutes, we would find ourselves knee deep in peanut shells and exit the ground to the sound of underfoot shell crunch. Once at home, he would talk more soccer politics to his friends and they would solve all of the competition’s soccer ills over a few glasses of spritzer.

This is what I grew up with and to me “soccer” is the name of the world game played with the round ball. Football on the other hand was something that Aussies played with an egg shaped ball whilst chasing each other around a paddock. Commonly known as rugby – whether league or union –  that was and is the dominant sport in this country. It’s really only in the last decade or so that the term “football” has been also used to describe soccer, bringing us in line with the UK and other soccer playing English speaking nations (are there others?). So soccer it is in this post.

I have just finished watching the tail end of the opening game of the World Cup. An exciting matchup between Brazil and Croatia, with the home team coming away with the win. Love the colour, the spectacle and the knee-high socks that stay up against all odds. I might even admit to admiring the odd highly toned striker/midfielder or two, but only because of their *cough* fancy footwork, *cough* grace and *cough* athleticism.

The game had the usual volume of on field machinations. It set me to thinking about what would happen if we applied some of these techniques in our day to day lives. So, what if we could see more of the following:

Soccer fans are in for a real treat over the next few weeks, with many more Oscar winning performances to come.

Australia will face its first opponent, Chile, in the next day or two. We are the firm underdogs. But there is something to be said for being privy to a great Aussie pile. May the Aussie boys experience their fair share in the coming weeks.

In the meantime, I will be watching for more pointers to add to my life manual called Living The World Cup Life.