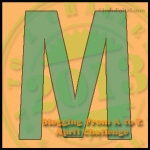 Self esteem can be a fickle beast. Some have it then lose it, some don’t have it then find it, some never have it and some have an abundance of it. Yet others use the lack of it as an excuse for all that is not right with their world.

We are all at different points in the spectrum.  We will also be at differing points during the course of our lives. Traditionally, middle age is associated with a dip in self esteem. It is said that this is the time when women enter the invisible stage. But I’m not buying it. I may yet be proven wrong, but for now, I refuse to don the cloak of invisibility. I refuse to accept that I no longer matter.

A couple of months ago there was a great article in one of our Sunday supplements about a 46 year old women who recounted her recent experiences with dating. She had four children and told the story of how she had no shortage of dates. In fact she had dated approximately six men in the last four months and put it down to an inner confidence and not shying away from  opportunities to meet people. In the article she lamented that in the media there were a lot more stories of women at that age bemoaning the passing of youth and complaining of feeling invisible. She is right. In preparing for this Challenge, I looked for material in our mainstream media which painted middle age in a positive light. I wanted to be inspired by stories of women who had found themselves at this age, changed an unhappy direction or otherwise took control of their lives. Apparently, this does not sell newspapers.

So what sort of message are we sending middle-aged women? With the push into fifty and the change in demographic, apparently our spending power doesn’t matter, at least not to advertisers. Our looks clearly don’t matter, unless they are used to compare or contrast with youth.

The fact of the matter is (no pun intended) we all matter. And the main person to whom we should matter is ourselves.  Hubris is never attractive and that’s not what I’m advocating. Rather,  to be aware of the small and subtle things we do everyday that diminishes our needs in our own eyes.

Take a look at Maslow’s hierarchy of needs, in particular the top three. How many of us inadvertently sabotage our chance at meeting the top three? For example:

Esteem needs: When someone pays you a compliment for something you did, do you belittle your achievement by making a flip comment or by saying “it was nothing”?

Self actualisation: Do you seek fulfillment and growth or do you belive this is all there is and you have to settle?

I’ve done all of these at various times, but no more. I’ve gone from if you mind, I don’t matter to if you mind, I still matter. Humility is important, but too much of it and it can diminish.

And the last word on mind and matter goes to Mark Twain:

What matters most to you?

Today I give myself permission to matter.

22 thoughts on “Today I Give Myself Permission to Matter #atozchallenge”