The true aim of politeness, is to make those with whom you associate as well satisfied with themselves as possible. It does not, by any means, encourage an impudent self-importance in them, but it does whatever it can to accommodate their feelings and wishes in social intercourse. Politeness is a sort of social benevolence, which avoids wounding the pride, or shocking the prejudices of those around you. Martine’s Handbook to Etiquette and Guide to True Politeness, Arthur Martine, Dick & Fitzgerald Publishers, 1866. 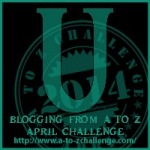 I tend to always mark the progress of the Challenge through the passing of the vowels and here it is, the last one. As they often say, and then there was U.

There is a fair bit of discussion going on in Australia at the moment about the re-introduction of a late night variety show. We do not have a locally produced version at the moment and have not had one for a while, so the TV executives must be thinking the time is now ripe. For my American friends, we do get your late night versions – Late Show with David Letterman and The Tonight Show, but clearly the populace is crying out for some home grown talent.

There is much speculation as to who the host might be. One former late night host interviewed today confirmed that being a late night host was not an easy gig and that the show’s success or failure depended on choosing the right front man. No number of international celebrities could account for the lack of a fun host and according to Mr Former this meant that the host had to be quirky but conventional.

So that got me to thinking whether this was possible. Because my initial thought was that quirky is the opposite to conventional.

But then I reminded myself that I always thought of myself as conservative but unorthodox which is seems to be equally as anomalous. The way I see it, I’m conservative in the big things like security, job, finances etc. but when it comes to the detail within those frames I tend to carry them out unconventionally.  I’m not ashamed to admit there is a bit of maverick in the old Curtain Raiser because it simply wouldn’t do to be so boring as to be totally predictable or without a sense of humour.

My kids would probably argue about the latter, but it’s nice to see them developing their wit with a few chips from the old block.

Of course one does not wish to wound the pride nor shock the prejudices of those around one, but strongly held notions should occasionally be challenged and rattled. I certainly appreciate it when someone gets me thinking and challenging conventions. It’s called an open mind.

There some great U words which describe all of us who are brave enough do our own thing at times. Here’s a celebration to all of us for being:

For we are the ones who share a glimpse of our authenticity with the world.

22 thoughts on “The U of Living Imperfectly: Unorthodoxy In Conservatism #atozchallenge”