A short and sweet totally random curtain raising post today apropos of nothing.

Having spent a fair bit of time on planes lately, I wonder whether having concluded a job interview for an air cabin crew position, the interviewer points the candidate to the nearest exit. Or maybe the real test is to see if the candidate remembers how many rows between him or her and the exit. 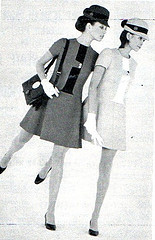 Actually the best flight I ever had was one from Cairns to Sydney. All the cabin crew were male and I certainly have no complaints about that. But what topped it was then the captain’s voice came over the microphone and introduced herself as “Jane”!! Certainly not  common in this country.

Has this ever happened on a flight that you have taken?

Come fly with me, come fly, lets fly away…